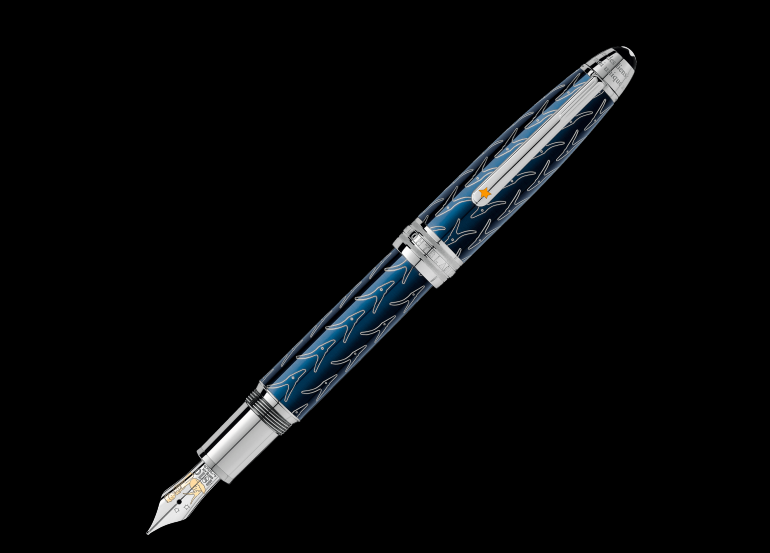 One that she showed me, and with which I was very taken, was the Montblanc Model 145, Meisterstuck Classique, platinum coated version. This is slightly slimmer than the 146 and has a smaller nib. Also it is a cartridge-converter pen, rather than a piston filler. The platinum plated fittings looked really smart against the black resin.

Handling the pen, the body did not feel too slender for me. Uncapped, at around 122mm it was a bit short for me to use unposted but this is not an issue as it posts beautifully, cheap mont blanc bonheur Pen coming up to around 153mm, making for a very comfortable and balanced unit. All in all, it weighs 21.7g. I do mostly post my pens and grip them quite far back from the nib.

Ill-prepared as I was, I did at least have a loupe with me and took a close look at the nib. This is what clinched it for me. I saw a perfectly formed, 14k beautifully polished gold nib, bi-colour with rhodium plating and with just a glimpse of daylight between the tines as the gap narrowed from the breather hole to the tip. And the tipping material was a work of art. Perfectly symmetrical, the top face of the tipping was cut down to a circle and the two sides were cut and smoothed perfectly to perfect Meisterstück Le Petit Prince Solitaire LeGrand Fountain Pen in to the tines. The tines were of course perfectly aligned. It was a joy to behold and all the indications were that it would write very smoothly and effortlessly. The nib was a medium.